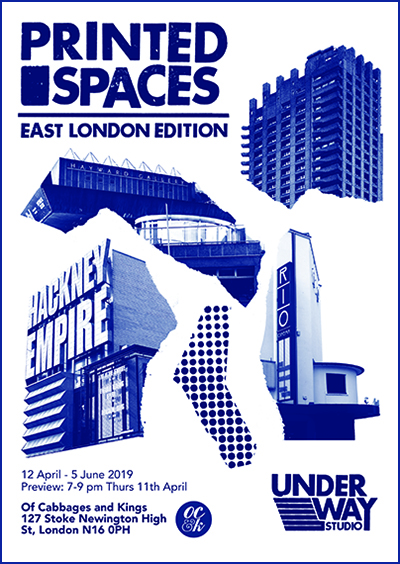 Underway Studio is an illustration and printmaking collective based in Brixton, South London. Founded in 2015, the collective work collaboratively on design projects using silk-screen print as a primary medium. Much of Underway Studio's work is influenced by architecture, form, texture and colour. Using physical print processes means their visual language is both playful and distinctive, incorporating photography, collage, drawing and embracing any happy accidents along the way.

After a successful launch in Brixton, Underway Studio presents ‘Printed Spaces: East London Edition’ a fully screen printed show exploring the architecture of London’s cultural spaces. This edition of the show features new prints with an East London focus. From galleries to music venues, many of these structures have been repurposed over the years becoming part of the fabric that makes up our city. In recent times some of these spaces have come under threat from property developers and new laws. Underway Studio aim to show the importance of these venues today in adding to London’s cultural diversity and rich history. The members of Underway Studio are: Aiden Barefoot, Anna Schmidt, Caitlin Parks and Melissa North.