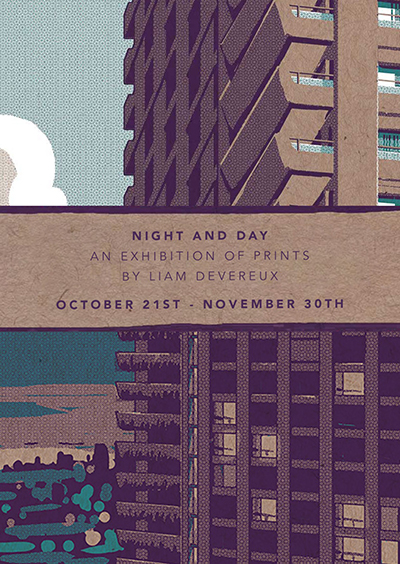 An Exhibition of Prints by Liam Devereux

This collection of limited edition prints began its life in a high Victorian terrace with a Hitchcock-esque view over neighbourhood gardens where Liam Devereux lived in North London. The subject matter of typical urban nightlife has long been an inspiration, and has continued into a body of work that started in London, but has now spread further afield. The pieces draw influence from British comic powerhouses such as DC Thompson as well as artists like Edward Hopper, and their ‘pulp fiction’ execution with a stripped down, halftone colour palette printed on recycled manila card gives the work a grainy quality up-close.

Liam’s Nighttime series was previously exhibited at Of Cabbages and Kings in September 2017. In recent months Liam has produced a set of contrasting works using the same halftone technique on manila card to create views of the city and its buildings by day. This time we will be exhibiting both series side by side. Night and Day will be on show at Of Cabbages and Kings from 21st October until the end of November.

Born in Merseyside, Liam has spent most of his career in and among the design houses of London. As a commercial illustrator he has created work for clients such as American Express, Lloyds Bank and Audi among others, while continuing to develop a unique style in his own body of work.